In December 2019, NIDON Clean Energy completed a breakthrough installation involving a 30 Ton Carrier chiller and four 8-foot SunTrac panels. This unit, located in the Honolulu Harbor in Hawaii, became the first active chiller in the world that runs with the SunTrac Solar Thermal SmartPanel™ and now reflects record-breaking amperage readings as a result.

This chiller is rated to typically draw about 63 amps but with supplementary power from the SunTrac panels, the load across three days in 28°C experienced a 75% decrease with a near steady state amp draw of 16 amps: 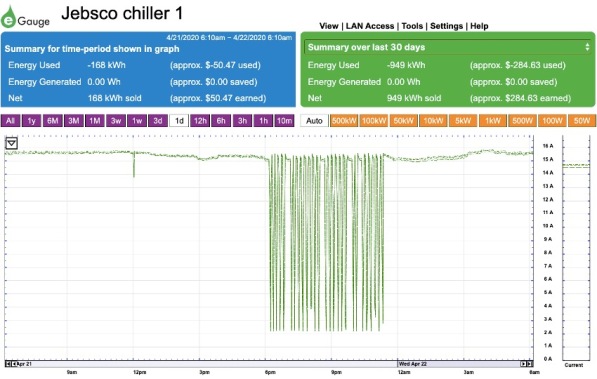 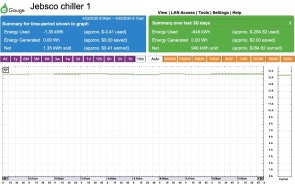 Timestamps reflected on the above data captures follow local Philippine time (PHT) and is to be adjusted back 18 hours to depict actual amp draw with respect to time of day in Honolulu, Hawaii (HST). Follow this link for live meter readings: eGauge Data for 30 Ton Carrier Chiller (To view amp data specific to activity from the SunTrac panels, scroll down to the control box and uncheck all boxes except for CT3, CT1, and CT2 Amperage.)

Along with the massive drop in amp draw, there is a corresponding decrease in the work being conducted by the unit’s digital scroll compressor leading to a significant reduction in the machine’s wear and tear on top of substantial electrical cost savings.

Data is being tracked and recorded by an eGauge metering device in a three-phase configuration and placed inside an outdoor-rated enclosure:

The eGauge device is placed inside an outdoor-rated enclosure

AC, CT, and Ethernet cables all safely and professionally lodged

Below is a screen capture of meter readings for the first two weeks of recording with the eGauge. The compressor amp draw still averages at 15-16 amps, with significant dips between midnight and dawn due to the cooler ambient temperature.

Update: One month’s worth of meter readings

A month of meter readings shows amp draw still at an average of 15-16 amps.